What is a resistor?

A resistor is a component of a circuit that resists the flow of electrical current. It has two terminals across which electricity must pass, and it is designed to drop the voltage of the current as it flows from one terminal to the other. Resistors are primarily used to create and maintain known safe currents within electrical components. 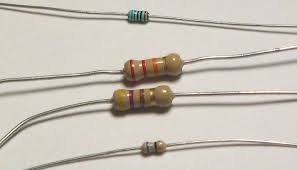 Resistance is measured in ohms, after Ohm's law. This law states that electrical resistance is equal to the drop in voltage across the mterminals of the resistor divided by the current being applied. A high ohm rating indicates a high resistance to current. This rating can be written in a number of different ways — for example, 81R represents 81 ohms, while 81K represents 81,000 ohms. On most resistors the resistance value is labeled using colour codes. 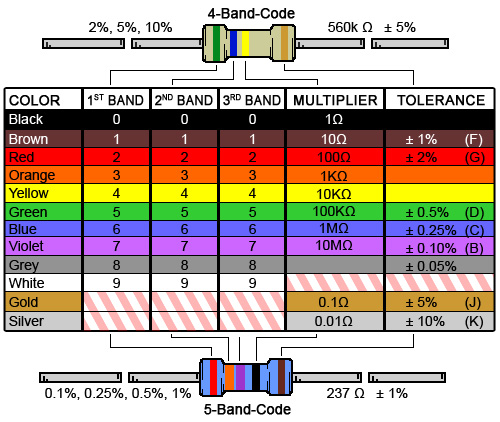 The amount of resistance offered by a resistor is determined by its physical construction. A carbon composition resistor has resistive carbon packed into a ceramic cylinder, while a carbon film resistor consists of a similar ceramic tube, but has conductive carbon film wrapped around the outside. Metal film or metal oxide resistors are made much the same way, but with metal instead of carbon. A wirewound resistor, made with metal wire wrapped around clay, plastic, or fiberglass tubing, offers resistance at higher power levels. Those used for applications that must withstand high temperatures are typically made of materials such as cermet, a ceramic-metal composite, or tantalum, a rare metal, so that they can endure the heat.

Resistors are coated with paint or enamel, or covered in molded plastic to protect them. Because they are often too small to be written on, a standardized color-coding system is used to identify them. The first three colors represent ohm value, and a fourth indicates the tolerance, or how close by percentage the resistor is to its ohm value. This is important for two reasons: the nature of its construction is imprecise, and if used above its maximum current, the value can change or the unit itself can burn up.

Every resistor falls into one of two categories: fixed or variable. A fixed resistor has a predetermined amount of resistance to current, while a variable one can be adjusted to give different levels of resistance. Variable resistors are also called potentiometers and are commonly used as volume controls on audio devices. A rheostat is a variable resistor made specifically for use with high currents. There are also metal-oxide varistors, which change their resistance in response to a rise in voltage; thermistors, which either raise or lower resistance when temperature rises or drops; and light-sensitive resistors.