OZEKI  10
Messaging for People and Machines
Contact us in e-mail: info@ozeki.hu

When controllers are setup to communicate on a Modbus network using RTU mode, each 8 bit in a message contains two 4–bit hexadecimal characters.

The main advantage of this mode is that its greater character density allows better data throughput than ASCII mode for the same baud rate. Each message must be transmitted in a continuous stream.

The mapping of MODBUS protocol on a specific bus or network introduces some additional fields on the Protocol Data Unit. The client that initiates a MODBUS transaction builds the MODBUS PDU, and then adds fields in order to build the appropriate communication PDU.

Error checking field is the result of a Redundancy Checking calculation that is performed on the message contents. Two kinds of calculation methods are used depending on the transmission mode that is being used (RTU or ASCII).

The format (11 bits) for each byte in RTU mode

Even parity is required, other modes (odd parity, no parity) may also be used. In order to ensure a maximum compatibility with other products, it is recommended to support also No parity mode. The default parity mode must be even parity.

How characters are transmitted serially

Devices may accept by configuration either Even, Odd, or No Parity checking. If No Parity is implemented, an additional stop bit is transmitted to fill out the character frame to a full 11-bit asynchronous character.

The maximum size of a MODBUS RTU frame is 256 bytes.

A MODBUS message is placed by the transmitting device into a frame that has a known beginning and ending point. This allows devices that receive a new frame to begin at the start of the message, and to know when the message is completed. Partial messages must be detected and errors must be set as a result. In RTU mode, message frames are separated by a silent interval of at least 3.5 character times. In the following sections, this time interval is called t3,5.

The entire message frame must be transmitted as a continuous stream of characters. If a silent interval of more than 1.5 character times occurs between two characters, the message frame is declared incomplete and should be discarded by the receiver.

The following drawing provides a description of the RTU transmission mode state diagram. Both "master" and "slave" points of view are expressed in the same drawing. 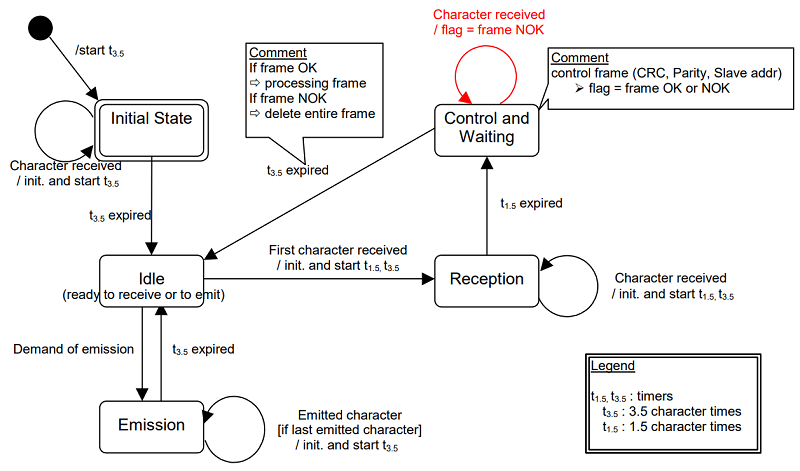 Some explanations about the above state diagram:

RTU mode includes an error–checking field which is based on a Cyclical Redundancy Checking (CRC-16) method performed on the message contents. The CRC field checks the contents of the entire message. It is applied regardless of any parity checking method used for the individual characters of the message. The CRC field contains a 16–bit value implemented as two 8–bit bytes. The CRC field is appended to the message as the last field in the message. When this is done, the low–order byte of the field is appended first, followed by the high–order byte. The CRC high–order byte is the last byte to be sent in the message. The CRC value is calculated by the sending device, which appends the CRC to the message. The receiving device recalculates a CRC during receipt of the message, and compares the calculated value to the actual value it received in the CRC field. If the two values are not equal, an error results. The CRC calculation is started by first pre-loading a 16–bit register to all 1’s. Then a process begins of applying successive 8–bit bytes of the message to the current contents of the register. Only the eight bits of data in each character are used for generating the CRC. Start and stop bits and the parity bit, do not apply to the CRC. During generation of the CRC, each 8–bit character is exclusive ORed with the register contents. Then the result is shifted in the direction of the least significant bit (LSB), with a zero filled into the most significant bit (MSB) position. The LSB is extracted and examined. If the LSB was a 1, the register is then exclusive ORed with a preset, fixed value. If the LSB was a 0, no exclusive OR takes place. This process is repeated until eight shifts have been performed. After the last (eight) shift, the next 8–bit byte is exclusive ORed with the register’s current value, and the process repeats for eight more shifts as described above. The final content of the register, after all the bytes of the message have been applied, is the CRC value. When the CRC is appended to the message, the low-order byte is appended first, followed by the high-order byte.

The security of standard MODBUS serial line is based on two kinds of error checking:

The master is configured by the user to wait for a predetermined timeout interval ( Response time-out) before aborting the transaction. This interval is set to be long enough for any slave to respond normally ( unicast request). If the slave detects a transmission error, the message will not be acted upon. The slave will not construct a response to the master. Thus the timeout will expire and allow the master’s program to handle the error. Note that a message addressed to a nonexistent slave device will also cause a timeout.